Compulsory pilotage routes within the GBR.

The Australian Government introduced compulsory pilotage for vessels over 70m in length and all loaded tankers in the Inner Route of the Great Barrier Reef (GBR) between Cape York (Lat 10ᵒ41’S) and Cairns Roads (Lat 16ᵒ41’S) in October of 1991.

The Australian Government introduced compulsory pilotage for the Torres Strait to the eastern end of the GNEC at Dalrymple Island on the 06th of October 2006.

The International Maritime Organisation (IMO) has adopted an AMSA recommended an extension of the two way route in the GBR & Torres Strait to enhance the safety of navigation and protect the region’s sensitive marine environment. 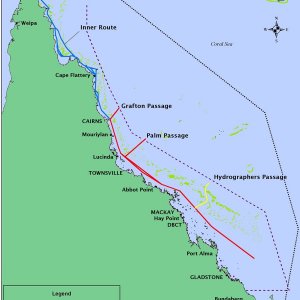